Fabian Schiller starts at the 24h race in Spa-Francorchamps 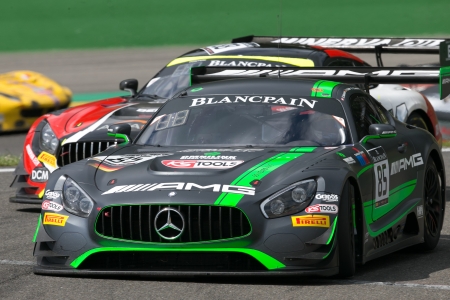 Next weekend, Fabian Schiller’s five-week summer break is finally going to end. After he unfortunately didn’t cross the finish line due to technical difficulties at the last event in French Le Castellet and therefore didn’t gain any points, the race driver from Troisdorf is now eager to sit behind the wheel of the Mercedes-AMG GT3 supplied by HTP Motorsport from Altendiez again. Schiller’s anticipation is increased due to the fact that he is going to travel to Belgian Spa-Francorchamps this time, because the longest track of the current racing calendar (7,004km) is one of his absolute favorite tracks due to its challenging layout.

The 24h-race of Spa-Francorchamps, the seventh of overall ten events of the Blancpain GT Series 2017, is also the highlight of the season of the popular international sports car championship, which hosts its races from April to October in seven European countries. The drivers can gain points for the respective cup in five sprint races as well as in five long distance races. Moreover there is going to be an overall ranking at the end of the season. The 24 hours of Spa are a special occasion because due to the exceptional distance, the drivers gain points during the marathon through the Belgian Ardennes not just by crossing the finish line but also after six and twelve driven hours.

The Circuit de Spa-Francorchamps is about 20km away from the German-Belgian border close to Monschau in the triangle between the cities Malmedy, Spa and Stavelot, to which municipal area the track belongs. The start- finish-straight of the track is close to the small town Francorchamps, which also explains the name of the track. Due to the altitude difference during the course of the track of about 100meters and the numerous bends with strong centrifugal forces the race has the nickname “Ardennes-rollercoaster”. It was already opened in the year 1921 and largely used public country roads back then. It was also more than twice as long as it is today with an original length of 14,863km.

“To drive a race in Spa-Francorchamps is in itself already a highlight. But to be a part of the 24hours is really unique. It’s not only the biggest GT3-race in the world with more than 60 sports cars, but due to the quality of the participants it’s possibly the highest level that has been reached in GT sports so far”, Schiller explains. “Personally I have really good memories of the track, because I always felt comfortable here in the past. Also I won the championship at the Renault Sport Trophy in Spa last year.”

Just like at the past races of the Blancpain Endurance Cup in Monza, Silverstone and Le Castellet, Fabian Schiller is going to share the HTP-Mercedes with starting number 85 with Austrian Dominik Baumann and Swede Edward Sandström again. The first free training already awaits the international trio on Thursday afternoon, before the qualifying sessions in the evening. From 9:55pm on the drivers are also going to undergo a night training to get accustomed to the special conditions of the 24h race. On Friday there is going to be the so-called “Super-Pole” for the fastest participants of qualifying. The start into the real race is then going to be on Saturday at 4:30pm.