Fabian Schiller’s back hunting down points in Budapest 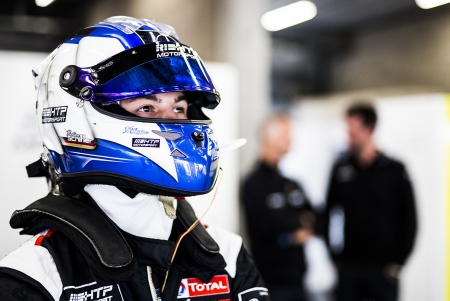 The fourth of five races for the Blancpain GT Series Sprint Cup starts at the Hungaroring this weekend.

After the 24-hour race at Spa-Francorchamps in Belgium, the Blancpain GT series took a well-deserved four-week break, but the popular international racing series for GT3 sports cars is back and making its way to the finish line. Three weekend events are still on the calendar this year, with the next two being sprint races in Budapest and then the Nürburgring in Germany, before the final round at the Circuit de Catalunya just outside Barcelona. Eleven of the world’s most renowned makes of sports cars, i.e. Aston Martin, Audi, BMW, Bentley, Ferrari, Jaguar, Lamborghini, McLaren, Mercedes-AMG, Nissan, and Porsche, have their top teams in the running for the coveted title.

Fabian Schiller can also rely on the professional support of an experienced and successful team. The 20-year-old driver from Troisdorf near Bonn is driving a Mercedes-AMG GT3 for the Altendiez-based HTP Motorsport team and is definitely one of the favourites in the outstanding Blancpain GT series. Schiller shares driving responsibilities for the approx. 550 HP strong V8 monster with Jules Szymkowiak from Heerlen and is heading to Budapest with great expectations. In the past three races of the series, the German-Dutch duo have gone from victory to victory in the Silver Cup for young drivers and have racked lots of points in the driver standings. “We didn’t have such a good start to the season in the endurance races, but things are going great for Jules and me in the Sprint Cup,” says Schiller. “We won at both Misano and Brands Hatch and also captured the Silver Cup in Zolder and are currently at the top of the tables. I’m now looking forward to another good result in Hungary and then back home game at the Nürburgring on 17th September with my family, friends, and partners on hand to celebrate!”

The Hungaroring is well known to all motor sport fans, since the Grand Prix of Hungary in the Formula 1 series has been held here every year since 1986 and DTM has already been to Budapest three times. The racetrack is just 20 km northeast of the Hungarian capital and the spectacular river valley setting offers spectators an excellent opportunity to follow the action on the 4.381 km course. Drivers consider the track very demanding because the relatively narrow 10 to 12 m wide band of tarmac and the numerous curves give drivers only a few opportunities to overtake. “Our GT3 sports car is almost twice as heavy as a Formula 1 car. That’s why it’s not so easy to get it in a good position to overtake the other cars on such relatively short straightways,” adds Schiller. “For us, it will be even more important than ever to get a good starting position in the timing runs.”

On Friday at 10:00 am and at 2:15 pm, Fabian Schiller and Jules Szymkowiak will have the opportunity to get to know the route and to tune up the HTP-Mercedes with the starting number 85. Then the timing runs start Saturday morning at 9:40, before the qualifying race at 3:50 when the first championship points will be awarded for just 30 minutes of racing. The main race will last an hour and will be at the starting line at 2:20 Sunday afternoon. All sessions will be broadcast live on the series’ YouTube channel. The current standings and timings can also be checked out at www.blancpain-gt-series.com.