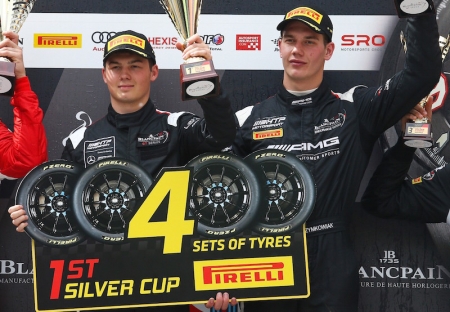 Fabian Schiller continued his successful run at international motorsports last weekend with a great double victory at the Silver-Cup of the Blancpain GT-Series 2017. The 20-year-old race driver from Troisdorf won the qualification run on Saturday as well as the one-hour main race on Sunday with his partner Jules Szymkowiak on the Hungaroring in Budapest. Thereby the German-Dutch driver duo secured the title of Silver-Cup champions early after only four of five races.

After already winning the championship at the Renault Sport Trophy early due to an unprecedented winning streak last year, Schiller didn’t have to wait until the final event this year as well to win a title. Currently the Bonn born driver and his team mate from Heerlen have collected 121 points, while their closest opponent only has got 86 points. With only 33 more points to be won, the two young sports drivers cannot lose the overall victory anymore before the last race.

On the 4.381m long Grandprix track at the gates of the Hungarian capital, Fabian Schiller and his 21-year-old partner once again confirmed the trust that HTP Motorsport team leader Norbert Brückner from Altendiez had put in his two juniors at the beginning of the season. At the beginning of the free trainings the yellow MANN-Mercedes-AMG GT3 already drove around the track in only 1:44,372minutes, which meant eighth place on the overall list of rankings. Things went even better for the HTP duo during the first qualifying, because this time the lap time of 1:43,753minutes was enough for third place. When things continued to become faster on the track later, the two didn’t catch an optimal lap though and they had to be content with the 21st starting position despite a further time increase.

Fabian Schiller already regained the lost ground during the initial phase of the qualification run and drove forward place after place even though the track is very narrow and bendy, which makes overtaking extremely difficult. The obligatory pit stops towards the middle of the race mixed the order of the 30 GT3-sports cars drastically, but the HTP-crew managed a perfect tire-change, so that the starting number 85 was able to reenter the race on 16th position. Until the crossing of the finish line it even gained two more positions, while the next Silver-Cup teams only came in way beyond P20 of the overall ranking.

On Sunday the two then showed their extraordinary class again and gained the Silver-Cup victory in the main race as well. There was a moment of shock right after the start, when Szymkowiak touched a brand colleague when trying to pass him by. The HTP-Mercedes fortunately didn’t lose any positions though and both vehicles were able to continue the race. As the eighth driver of the race, Schiller gained more points for the overall ranking after his great performance four weeks ago at the 24h of Spa and moved forward to 19th place among the almost 100 participants of the Blancpain-Series.

Despite his great performance Fabian Schiller wasn’t completely content after the race: „Of course I’m really happy that we’ve now won our class, the Silver-Cup, for the fourth time in a row and achieved such a huge advance in points that we can’t be caught up with anymore”, the Rhinelander said. “I had to fight a lot more than usual though. The lap times in the beginning of my stint were okay, but compared to my other races I wasn’t able to handle the car as well. That’s something we still have to work on, but that’s exactly what we’re going to do and then return even stronger. It’s good to win the Silver-Cup but our goal still has to be to regularly end up among the top of the overall list of rankings.” 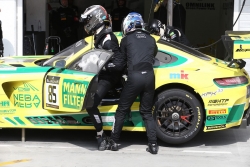 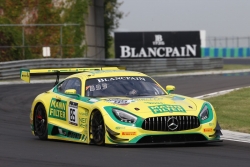 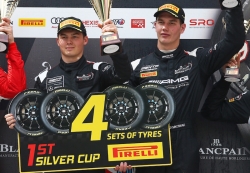 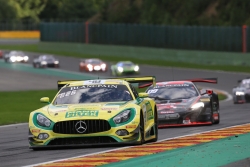 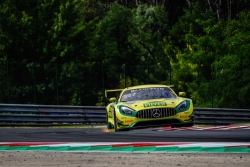